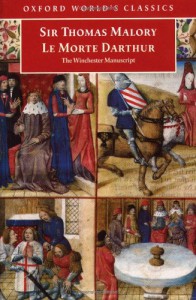 This book is a cornerstone of Arthurian literature, and an engaging read. Once I got used to the language, it was something that really captured my imagination. It has its problems, but that's to be expected of something cobbled together out of multiple legends from multiple countries and written by an accused rapist in a prison.

Le Morte Darthur was the first manuscript to pull the widely disparate King Arthur stories into one comprehensive narrative. As a result, it has issues with previously dead characters showing up later, as well as characterization that can be inconsistent and different from other well-known pieces of work. Sir Gawain is a good example of this. He is sometimes shown to be of noble character, and at other times is petty and cruel. It's certainly very different from the Gawain in Sir Gawain and the Green Knight.

Modern readers don't have all of the same interests as contemporary readers would have, so the many descriptions of jousts and battles can be tedious. In addition, it certainly isn't a feminist piece of work, though the exact degree of misogyny can be debated. The language and syntax may be off-putting to those with only a casual interest in the book, as it was written in 1469 or so. Also, this book is really violent. But despite its problems, I enjoyed this book very much and am currently working on a re-read. In fact, I brought it halfway around the world with me after a visit to my home country.

There's a reason this manuscript has survived since the 1400's. The book's central themes and conflicts -such as love, betrayal, moral ambiguity, and duty- are largely timeless. Maybe nowadays we can't relate to being a knight in love with a Queen or a Lady, but many of us can certainly relate to being in love with someone we shouldn't be. And maybe it's hard to identify with a king, but most of us can understand trying to accomplish something great and having it fall apart. By now, pretty much every reader will know roughly how the book ends before they even read the first page, and it makes the characters' struggles and tragedies all the more poignant.

This version largely keeps up an alliterative structure, which I liked, and the definitions at the bottom of the pages were helpful but extensive enough to be distracting. In addition, parts of the dialogue are really amusing. Especially if you translate them into modern English. There's a section where Arthur is about to fight a giant and basically tells him, "You're the fugliest fugly that ever fuglied, and Imma smackabitch."

Overall, it's not really a book for someone with mostly a passing interest in King Arthur or someone looking for an easy read. But it's an important piece of historical literature and I liked it a lot.
Tweet